For many refugees the alphabet represents the start of a new language and a new future, but Anisa’s alphabet is different. A poignant insight into one girl’s experiences, as each letter unlocks a part of her story.

Once Upon My Legs 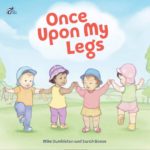 From once upon my blanket to once upon my legs, see the children gradually find their feet. And there are adventures every step of the way! 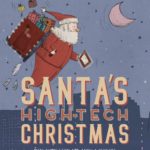 With his presents scanned and his list ready on his fancy techno-pad, Santa zooms through the sky on Christmas Eve.

What could possibly go wrong? 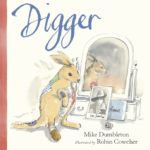 The poignant story of a toy kangaroo that goes to war with a young man who doesn’t come back. Digger is the story of one toy kangaroo, one Australian soldier and two girls, in two countries on opposite sides of a world at war. It’s a quiet reminder of the casualties of war, and a tribute to the French schoolchildren who once tended the graves of Australian soldiers who died on the Western Front in the heroic battle for Villers-Bretonneux in April 1918. 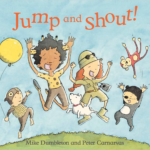 We’re going out! … Jump and shout…. clap and cheer on this rollicking adventure with a lively family. Join them as they swing, skip and tumble through the neighbourhood on a joyful day out. A fun rhyming story full of actions, sounds and movement. 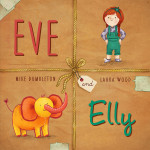 Elly is Eve’s toy elephant, but he’s also her best friend. When Elly goes missing, Eve is the one who is lost.  When Eve loses her faithful companion, a stuffed elephant called Elly, she’s terribly sad. Eve’s father will do anything to cheer his little girl up, so he tells Eve what adventures her toy has been up to. Dad’s tall tale turns little Elly into a towering hero. But if Eve has seen through the story, she’s not going to let on. She loves her silly dad just as much as she loves Elly.

Santa has received a very special Christmas letter in the mail. Now he is packing his bags and setting off, promising to be back by Christmas Eve.  But where is Santa going ?  And why?  Quick … hop on board.  Let’s find out.

Illustrator Snip Green, Random House, 2014
Douglas Mawson led the first Australian expedition to the Antarctic. Meet Douglas Mawson tells the story of how Mawson survived the dangers and challenges of the frozen continent.

Illustrator Tom Jellett, Random House, 2012
What does Santa get up to after all the presents have been delivered? An adorable Christmas picture book with a cheeky Australian twist.

Illustrator Jobi Murphy, Random House, 2012
Muddled-up Farm is a very special place, but then it changes! How can the animals save it? Come on … open the gate. Let’s see what’s happening.

What Will Baby Do?

Illustrator Craig Smith, Working Title Press, 2009,
What will Baby do? Turn the pages to find out! A book to enchant all babies, from the team that created the award-winning picture book Cat.

Illustrator Craig Smith, Working Title Press, 2007
Enter the world of Cat and discover how exciting, exhausting and
downright dangerous life for this fearless feline can be!

You Must Be Joking

Illustrator Greg Holfeld, Working Title Press, 2007
Superhero Jason and his faithful companion, Yapper, take on the task of rescuing the world’s best soccer player from a gang of kidnappers on the other side of the world. Despite all odds and his parents’ warnings, boy and dog survive tornadoes, fires and crocodile infested swamps and return victorious.

Illustrator Terry Denton, Random House, 2001
A grandmother and her young grandchild treasure the time they have together. The wonderful hours spent gardening, fishing and paddling in the sea will always be remembered. … An uplifting story about a relationship that never dies.

Illustrator Tom Jellett, Random House, 1999
What do you do when dad loses his job and life begins to change?
A young girl with a grand plan is determined to make her father feel wanted again. Hidden away at the bottom of the garden she quietly sets to work. … A touching story where hope and understanding finally blossom.

Illustrator Kim Gamble, Scholastic, 1997
It’s time for bed but a small child is restless. An adventure follows where the imagination runs riot as the child outwits all the creatures that wait in the wild.

Illustrator Rebecca Pannell, Macmillan Edn, 1994
The bane of Rebecca’s life was the food served up at meal times: brussels sprouts and bacon. Rebecca thought she had the problem under control. But she could only hide so many brussels sprouts. And what about the bacon?

Illustrator Ann Whitehead, Macmillan Edn, 1994
Old MacDonald goes on holidays leaving his daughter in charge. Life on the farm will never be the same again! She turns an ordinary farm into a Health Farm, and everyone’s a winner!

Illustrator Leigh Hobbs, Allen and Unwin, 1993
Tracy’s new teacher is a gorilla called Mr Knuckles. Her parents refuse to believe her until a postcard arrives from Central Africa. Her father finally takes an interest in what is happening but by then Tracy has decided that there are some things it is best for parents not to know.

Illustrator Marina McAllan, Macmillan Edn, 1993
A wordless picture book which tells a story about Mrs Watson and her many animals including a mischievous goat which eats everything left in its way.

Granny O’Brien and the Diamonds of Selmore

Illustrator David Cox,Omnibus Books, 1993
Granny O’Brien loves to sit with her pet poodle, Panther, and watch adventure movies on television. But one day, on their way to the supermarket, Granny O’Brien and Panther become involved in adventure all of their own.

Illustrator Ann James, Omnibus Books, 1991
Vanessa wakes up one morning with a brilliant idea for making lots of money. So she packs her bull whip, camping knife and hunting net and travels to the ‘Back of Beyond’ to snare a dangerous, toothy, tough, rough crocodile. When she gets home she and Dial-a-Croc go into business.

Caitlin is teased by a classmate named Rex. But, it doesn’t pay to make fun of someone with Caitlin’s imagination if you have a name like Rex. You never know what kind of trouble you might get yourself into. Terrifiedosaurus Rex is a hilarious story about a girl whose imagination can cause havoc. At a deeper level it is about the power of imagination and how it should not be underestimated in the minds of children.

Illustrator Richard Dall, Era Publications, 2011
Grace and Ethan are back! And this time they are heading to New York! The stage is set. The World Young Inventor’s Competition is on and Jet-bike is in with a chance. But before Grace and Ethan can become the next superstars – a horrible kidnapping takes place that involves everyone in ways they never imagined. Take a ride through an action-pack adventure as they attempt to unravel the clues, solve the crime and win the competition. Will Jet-bike be the best invention yet? Jet-bike is a thrilling final chapter to the Jet-ball and Jet-board trilogy.

Illustrator Roger Roberts, Era Publications, 2009
Ethan knows he can win the skateboarding contest. Jet-board is a sure-fire winner. But when Jet-board helps to save someone’s life, a new adventure begins to unfold. Suddenly Jet-board is missing and Ethan and his sister Grace must pull out all the stops to get it back, win the competition, and set the record straight. Jet-board is the exciting, action-packed sequel to Jet-ball. At a deeper level it is about competition, trust and honesty.

Illustrator Roger Roberts, Era Publications, 2008
Cain King is trouble. He is also big and slow. So when Cain challenges Ethan to shoot baskets, the stakes are high and Ethan is confident he can win. Ethan should have known better than to trust Cain. But Ethan also had a secret weapon – his sister Grace. What they weren’t expecting was to be caught up in a crime. Jet-ball is a gritty, urban thriller. At a deeper level it is about bullying, competition and being resourceful.

Illustrator Richard Dall, Era Publications, 2008
Russell’s father was a wildlife ranger, so Russell knew all about looking after Joeys. But nothing could have prepared Russell for this Super Joey. Who will end up with Super Joey: Russell’s family? The zoo? Researchers at the university? Or two unlikely criminals who see ‘money on legs’? One Cool Kangaroo is a wild read about a wild kangaroo. At a deeper level it is about responsible care, fame and exploitation.

Illustrator Nina Rycroft, Era Publications, 2007; ETA/Cuisenaire, (USA) 2007
Caitlin loves wild animals. She begs her parents to let her have an unusual pet. They turn down her requests for a panda, a camel and a boa constrictor. But they are happy to let her have a mouse. What they are not ready for is the kind of mouse it turns out to be. Hippopotamouse is a hilarious story about an imaginative girl and her extraordinary pets. At a deeper level it is about adults listening to what children have to say.

The Giraffe in a Scarf

Illustrator Donna Gynell, Era Publications, 2007
When Louise, the giraffe in the zoo, gets a cold, the vet gives her a scarf. It looks wonderful. This is the colourful start to Louise’s life as a fashion model, travelling the world. The Giraffe in a Scarf takes us into the world of the rich and famous. But as Louise discovers, fame and fortune are not everything in life.

Illustrator Shane Nagle, Allen and Unwin, 1995
Benny has a problem. He is crazy about sports shoes. He wants boots that will make him fly, sky high. He dreams of jumping so high that he can slam dunk one ball on the way up and another on the way down. His Grandad knows just what Benny is after – the greatest, the fastest, the ultimate sports shoes. But they don’t know yet, what it is to be pumped up…

Watch Out For Jamie Joel

Allen and Unwin, 2003
Against the background of a busy high school, a student and teacher are thrown together in ways that test them both. With sympathy, humour and a sharp eye for the truth, Mike writes about the complicated push-and-pull between teenagers, parents and schools. 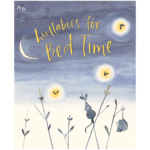 Story included in 30 Australian Stories for Children
Random House, 2003
The illustration for Mike’s story features on the cover of the book.

co-author Linda Dumbleton, Era Publications, 2009
Can Cards is an easy-to-use goal-setting system for primary and middle school students to assess their own writing and learning. Can Cards is a simple and consistent learning tool for successful writing. Can Cards includes; text types explained in student-friendly language, detailed examples included with helpful hints and each text type features two different levels that can be used across different year levels or for varying levels of capability. Order here.

Addressing Literacy in Society and Environment

Addressing Literacy in The Arts

South Australian Education Department, 1995
A book which explains how a range of effective teaching methods, which improve student writing across the curriculum, can be incorporated into a simple and flexible publishing system. Central to this notion is the development of a Personal Achievement Book which can be used as a tool for monitoring student performance and demonstrating growth as a writer.

Hands On Poetry – A Practical Anthology

co-author with Jeff Guess, Educational Supplies (Dominie), 1993
Practical and imaginative frameworks for the writing and publication of poetry.